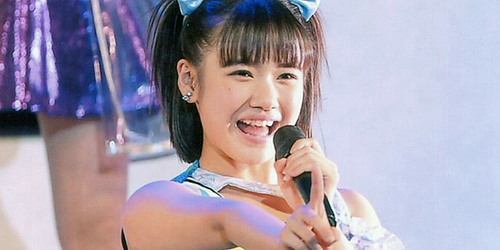 She's publicly announced on December 16, 2016 on Nippon Budokan stage, as an official member of 13th generation with Kaga Kaede during the last concert from fall tour "Morning Musume.'16 Concert Tour Aki ~MY VISION~". Inheriting the official color golden yellow, she describes herself as a real spring rolls lover and someone who bet on her pretty smile to being loved. Fans of japanese and overseas fandom will quickly compared her to Tanaka Reina and Kamei Eri, both legendary members from Morning Musume. 6th generation, respectively thanks to her first name and her good looking similar to her. Tsunku♂ himself called her "Nidaime Reina" (2代目れいな) in official lyrics of "Joshi Kashimashi Monogatari (Morning Musume '17 Ver.)" (女子かしまし物語 (モーニング娘。'17 Ver.)) which means the second Reina, still referring to Tanaka Reina.

At first, she will be strongly intimidated by her generation mate Kaga Kaede, mostly by her experience in Hello! Pro Kenshuusei but also because they don't find any common point. But together, they will find a common goal : making Morning Musume. 13th generation a legendary generation whose everyone will remember. 13th generation will be awarded Kudo Haruka as their mentor to help them integrate into the group and organize themselves in their work during one year, until Kudo Haruka gets her sotsugyou from Morning Musume. and Hello! Project. Three of them will held the 13th generation fanclub exclusif event on February 21, 2017 in which the new members will make their statement of commitment as a Morning Musume. member, here Reina's one : « Statement of commitment, Yokoyama Reina. Thank you for welcoming me into the Morning Musume. thirteenth generation. I am now a Morning Musume. member and I will be forever. I was Hello! Pro Kenshuusei member for four months. About my singing performances, I still have a lot to learn. But now I don't have to worry anymore. At first I was alone, but now Kaga Kaede is by my side and takes care of me. It makes me very happy. As a member of the thirteenth generation, I now contribute to a new formation of Morning Musume. I hope to be able to discover all the possible learnings and succeed them one by one. I count on my senpai of course, but also on all of you to take care of me. From now on, I would do my best not to disappoint anyone. In the group, I hope to be able to hold a place as MC because I like to speak, I also hope to be able to maintain very good performances at the height of the group. From now on, thank you for accepting me as a member. »

Reina has many nicknames, but she's mostly nicknamed Yokoyan which is her official nickname chosen by Kudo Haruka about a month after she joined. Some Hello! Project members called her Yokoyoko thanks to the ex-ANGERME leader Wada Ayaka who started to call her like that. Otherwise, her Hello! Pro Kenshuusei generation mates called her Reina, as she was called by her school friends before going into business.

Announced when she debuted, Reina's motto is "Cherish every moment!" (時間を大切に！), based on the fact that Reina wants to have fun in each of her activities or work so she never realizes the passing of time. Her blood type is O and she had to do this test when she joined, she didn't know it before. She measures 152.7cm which makes her one of the smallest members of Morning Musume.'20 but also of the entire Hello! Project. One of her many goals is to go around the world with Morning Musume.'20. Yokoyama Reina was born on the February 22, 2001 in Saitama in Japan. She is today one of the members from Morning Musume.'20 current lineup, part of the 13th generation since December 12, 2016. In a three-year career, she has already managed to build solo activities between her two consecutive solo photobooks and a radio program that she hold weekly. She is also 15th generation group's mentor with her generation mate Kaga Kaede.

All events and concerts are postponed due to COVID-19.